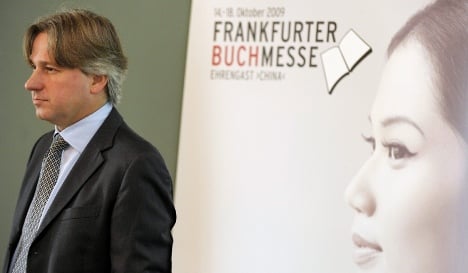 In mid-September, a symposium organised ahead of the world’s biggest book fair generated fireworks with two dissident Chinese intellectuals initially invited and subsequently “de-programmed” owing to protests from Beijing.

Following a German uproar, the pair were finally asked again to attend, causing part of the official Chinese delegation to storm out.

China’s ambassador to Germany, Wu Hongbo, called the action by the fair’s hosts “unacceptable”, and said it was “not an expression of respect for their Chinese partners”.

But Herbert Wiesner, head of the German chapter of the writer’s defence organisation PEN, said that “Chinese organisers have mistaken themselves for state censors. It’s frightening.”

He called this year’s fair “a balancing act”.

In Berlin last week, fair director Jürgen Boos said organisers had known there would be protests.

“There is no doubt there is censorship in China. We are far from a democracy. But when the contract was signed with Beijing three years ago, we stipulated there would be complete freedom of expression,” he said.

Less than half of the 500-odd events with a Chinese theme will be organised by Beijing, he explained.

Dozens of non-governmental organisations, many of which are human rights groups, will be also represented in Frankfurt. They will not be ignored when Chancellor Angela Merkel inaugurates the fair on Tuesday.

She is opening the event together with Chinese Vice-President Xi Jinping.

Also invited are representatives from Tibet and from China’s Uighur Muslim minority, two sources of clashes in recent months. They will include the Uighurs’ exiled leader, Rebiya Kadeer.

Both groups say they are subjected to political, cultural and religious repression in China.

But Boos stressed that “our role is not political, it is meant as a platform for the freedom of expression.”

“We will authorise all forms of demonstration allowed in Germany,” he added.

The book fair is used to controversy. Last year’s guest was Turkey and it too was taken to task for curbing freedom of expression. In 2007, Spain’s Catalonia region was guest of honour — Catalan is one of four official languages in the country — and snubbed authors writing in Spanish, even if they lived in the Catalan capital

China is not a major force in international publishing meanwhile, with relatively few works translated from or into its main languages, and business is the main function behind the Frankfurt fair.

Some 6,900 exhibitors from around 100 countries are to gather in Frankfurt until Sunday, around 400 fewer than last year, and each publisher has trimmed the size of its participation.

“The UK editorial presence at the Frankfurt Book Fair next week will be sharply reduced from its usual levels, with US editors expected to be even fewer on the ground,” the trade publication The Bookseller forecast.

“It’s likely to be a quieter fair anyway as the large firms in the US are unlikely to be coming, and possibly large firms elsewhere outside Germany too, and they tend to be the ones pushing up prices,” noted a British publisher who asked to remain anonymous so as not to offend partners.

Other participants said they could not remember the last time that Frankfurt’s big hotels still had rooms available a few days before the fair opened.

Another focus of this year’s edition will be electronic books after the Internet distributor Amazon.com launched an international version of its e-book reader Kindle.

Half of the sector professionals questioned by fair organizers estimated that digital book sales in 2018 would be greater than those of paper-based copies.

Publishers are trying to figure out how to make money from the trend, with many web surfers already accustomed to downloading content for free.