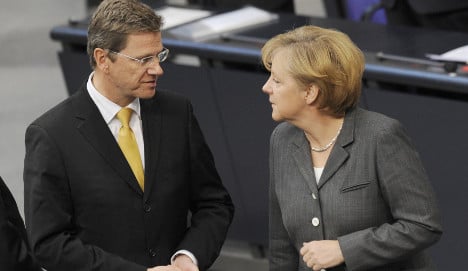 The talks between Merkel’s conservatives Christian Democrats (CDU), their Bavarian CSU allies, and the pro-business Free Democrats (FDP) could last weeks as they thrash out the policies needed to get Europe’s top economy back on track after its worst post-war slump.

Merkel has said she wants negotiations wrapped up and a new government in place by November 9, when Germany welcomes world leaders to mark the 20th anniversary of the fall of the Berlin Wall.

A report in Monday’s edition of mass-circulation daily Bild said she wanted a working government by October 27, in time for the first session of the new parliament.

But FDP chief Guido Westerwelle, a virtual shoo-in to become vice-chancellor and foreign minister, tried to rein Merkel in, telling the Bild am Sonntag he would prefer “thoroughness ahead of speed.”

“All three partners should know that thoroughness is much more important for our country than the question of whether we take a few more days to sit down and negotiate,” he said.

Among several areas that could prove tricky during the talks, the sharpest point of discord between the new allies is likely to be fiscal policy.

Although all sides agree on the need for tax cuts to jump-start Germany’s ailing economy, there are wide differences on how far taxes can be slashed given a gaping hole in the public purse.

During the campaign, the business-friendly FDP called for tax cuts amounting to €35 billion ($51 billion) while the CDU/CSU pledged only €15 billion in tax relief and stressed the need to rein in the budget deficit. A working paper reportedly drawn up by Merkel’s office and leaked over the weekend said the incoming government would need to slash the deficit by €40 billion.

Volker Kauder, a senior CDU official, insisted that health care reforms passed under the previous “grand coalition” government would not be touched, whereas the FDP wants them rolled back. FDP general secretary Dirk Niebel on Monday dismissed the CDU’s position on health reform as “banter.”

Tension is also brewing over how key ministerial posts are divided, with the Finance Ministry appointment seen as the most likely to stoke friction. Weekend media reports said that Merkel wanted the finance post for the CDU and had lined up senior party man Roland Koch for the task, although Koch himself played down his chances.

Monday’s talks are scheduled to begin at 3 pm but are unlikely to result in concrete decisions immediately.

Twenty-seven senior politicians (nine from each party) will take part in the talks and will split off into 10 working groups to hammer out individual policy areas. A second round of negotiations is expected Thursday.