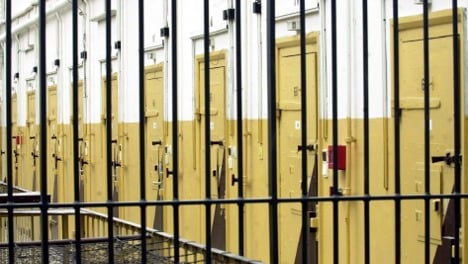 File photo of a Stasi prison in Schwerin. Photo: DPA

“Not a day goes by without us reliving the past,” says Carl-Wolfgang Holzapfel, 65, who was jailed for crimes against the state and to this day cannot stand being in a room with the door closed.

A West German, he was arrested in East Germany for political activism, jailed, and later “bought back” by his government in exchange for hard currency, a common practice at the time.

Five of a group of men sitting around a table spent between 13 months and eight years in prison for a variety of crimes, including “hostility to the regime,” “illegal trafficking,” “attempted flight from the East German republic” and “spying.”

“I can’t stay in a small flat because I feel I’m choking (…) and when I watch a film about those times I’m overwhelmed with memories,” Holzapfel says. “Speaking of it here helps, we’re a community.”

Others in the group agree, with one suggesting they have been “abandoned by a society that just wanted to turn the page” on history after the fall of the Berlin Wall.

After the reunification of the country in 1990, the government allowed victims of the East German state to inspect their Stasi files so they can draw a line under the past.

But some secrets hidden in the files just make things worse.

“The worst shock came from reading the file,” says 74-year-old Edith Fiedler, who spent 20 months in prison because of tales told to the Stasi by a “jealous” sister-in-law.

“I only found that out when I read my file,” she said, recalling how authorities took away her nine-year-old son and put him in a home.

Sitting opposite her, her son, Daniel Fieldler, now aged 41, remembers how he was lied to and told his mother was in a coma after a road accident.

“The Stasi took my life away,” he says.

Several in the group have gone through periods of depression. Some have considered suicide.

Tatjana Sterneberg, 57, who was betrayed to the Stasi as she prepared to flee East Germany with her Italian boyfriend, suffers to this day.

She and her boyfriend were held for some three years before being “bought” by the West German government.

But the couple was never able to get over it. They divorced and in 1996, she was hospitalised for depression.

“We are victims of the Stasi, but we have a credibility problem. We have to prove we suffered,” says Sterneberg.

“We need this support group because we can relate to one another,” adds Fiedler.

Adam Lauks, 59, agrees. Once married to an East German, he was jailed for seven years on charges of smuggling. Today he is obsessed with the thought he might have been betrayed by his former wife.

The only “real” spy at the table is Werner Krueger, 73, who spent eight years and three months in jail before being exchanged for another spy.

“The Stasi was never able to destroy me,” he said. The others kept quiet.