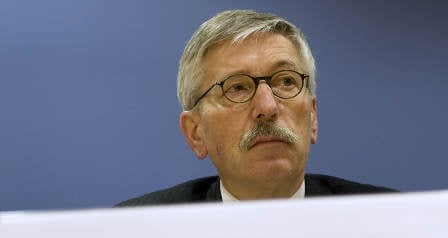 Sarrazin’s interview last week with the Lettre International magazine has lead to calls that he should resign his appointment as a Bundesbank board member.

Bundesbank President Axel Weber joined the debate Saturday and said the institution’s reputation was at stake if Sarrazin continued to sit on the board.

“I already see that there’s been damage to the institution’s reputation,” Weber told reporters in Istanbul at a meeting of the International Monetary Fund.

As a political appointee, Sarrazin cannot be sacked by Weber.

In the interview, Sarrazin said of Berlin, “A great many Arabs and Turks in this city, whose numbers have grown because of the wrong policies, have no productive function other than as fruit and vegetable sellers.”

Sarrazin, a long-time member of the Social Democrats, said one of Berlin’s biggest problems is that “40 percent of all births take place in the lower class.”

“We must completely change family policy: away from cash benefits, above all in the lower class,” he told the magazine.

In an interview with the daily Sueddeutsche Zeitung published Friday, Sarrazin said he “regretted” his remarks, saying “not every formulation I made in the interview was successful,” but criticism against him continues to mount.

Members of the Social Democratic Party have called for Sarrazin’s expulsion and Berlin prosecutors are investigating whether he may have violated Germany’s hate speech laws.

Sarrazin, who began his Bundesbank post in May, was previously the finance senator for Berlin and is credited with stabilising the city’s finances. But he has long been a controversial figure prone to making incendiary comments.

Last year, Sarrazin told the Rheinische Post newspaper that the city’s poor should consider bundling up more in the winter because the city would not provide assistance for heating costs.

“If energy costs get as high as rents, then people will start to consider whether they can’t live with wearing a thick sweater at a room temperature of 15 or 16 degrees [Celsius],” Sarrazin was quoted by the newspaper as saying.

“Heating costs are included in payments for those who receive unemployment benefits,” he said. “At my house the temperature was always 16 degrees … I survived.”