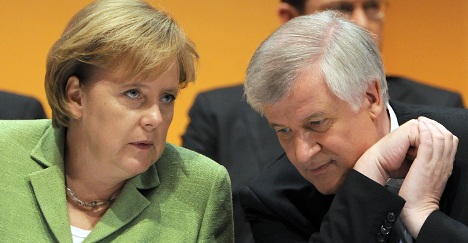 After a meeting late Thursday night at the Chancellery, the head of the conservatives’ joint parliamentary group, Volker Kauder and the Bavarian CSU’s parliamentary boss Peter Ramsauer, vowed that taxes would be lowered at some point in the future.

Tax cuts will be among the central demands the pro-business Free Democrats (FDP) make when formal coalition negotiations begin on Monday in the state of North Rhine-Westphalia.

The German Taxpayers Association has estimated the federal government will collect an extra €76 billion in “stealth taxes” through cold progression in the five years up to 2010. Critics of the German tax system point out that the United States, Britain and France all adjust income thresholds for inflation.

Kauder and Ramsauer said it had not been discussed at the meeting when tax cuts might kick in. While the CDU has previously left the possibility of tax cuts open, the CSU pushed hard for relief during the election campaign, calling for cuts to begin in 2011.

For now, the emphasis would be on getting an agreement with the FDP on what kind of tax relief to introduce.

The conservatives wanted to make sure income rises in future were not “devoured” by taxes, they said. The FDP is floating an increase to the child allowance to €8,004 among other things.

Kauder stressed that during the negotiations with the FDP, the conservatives would also be keeping a close watch on the bottom line of the government’s finances.

Ramsauer said he believed a deal could be signed with the FDP “very quickly.” He named October 27 as the date by which a coalition agreement should be finalised. He said the CSU and CDU had developed an “effective and efficient” strategy for the talks.

“We are absolutely in agreement on all of the main points,” he said.

Regarding the sticking point of Germany’s health insurance fund, the conservatives adopted a conciliatory tone. CDU politician Jens Spahn told Berliner Zeitung that the Gesundheitsfond reform, whereby everyone who is insured by a state health fund pays the same contribution of 14.9 percent of their income, “a typical necessary compromise left over from the grand coalition.”

The FDP opposes the fund, though Merkel has ruled out abolishing it altogether.