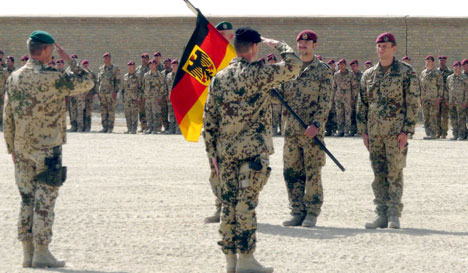 “Withdrawing from Afghanistan now would mean again abandoning the country to radical Islamists who first terrorise their own people and then extend their terrorism to the world at large,” said Guido Westerwelle.

“We need to ensure as quickly as possible that the Afghans are able to provide security within their own country,” he told the German Society on Foreign Relations’ magazine Internationale Politik.

While Westerwelle has not officially thrown his hat into the ring to become foreign minister, he is widely tipped to clinch the job, as the leader of Chancellor Angela Merkel’s new coalition partner, the Free Democrats.

He added, however, that Berlin wants “to end every German military deployment as quickly as is realistically possible.”

With all major parties apart from the hard-line socialists of The Left broadly agreed that the country should continue its unpopular mission in Afghanistan, analysts concur that policy is unlikely to shift much under the new government. But the deployment of around 4,400 troops in the increasingly bloody mission in northern Afghanistan shot to prominence in campaigning after a series of messages from Islamic extremists, including al-Qaida chief Osama bin

In one video, a German-speaking Taliban militant calling himself “Ajjub” said: “Because of your commitment here against Islam, attacking Germany has become an attractive idea for us, the mujahideen.”

Westerwelle warned that a premature withdrawal from Afghanistan would “only result in Kabul once again becoming the capital of world terrorism.”

“Our engagement in Afghanistan is not based on altruism. We are there to protect our own security interests,” he said.