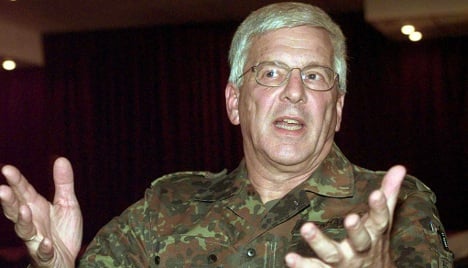 Klaus Reinhardt told Bild am Sonntag newspaper that Germany should work together with France and Britain to determine an exit strategy “by the end of this year” for its 4,400 soldiers.

Such a strategy should be decided upon so that troops could be drawn down within three years, he said.

Reinhardt will be an influential voice in the current debate over Germany’s involvement in Afghanistan, which intensified after an estimated 30 civilians were recently killed when a German commander ordered an airstrike on two Taliban-hijacked petrol tankers.

He commanded the NATO-led Kosovo peace-keeping force in 1999 and 2000.

Political leaders including Chancellor Angela Merkel and her rival in today’s election, Social Democratic candidate and Foreign Minister, Frank-Walter Steinmeier, were forced to start talking about exit strategies after the controversial airstrike, though they have refused to lay down firm deadlines for a withdrawal.

Only the socialist Left Party has called for immediate withdrawal, with the other four major parties agreed that the deployment should stay until Afghanistan has stabilised and can manage its own security.

Reinhardt also called for a renewed effort to train and prepare Afghanistan’s own police force and army so that “responsibility for security could be handed over to the Afghan government as soon as possible.”

He said this was a precondition for a withdrawal of German troops.