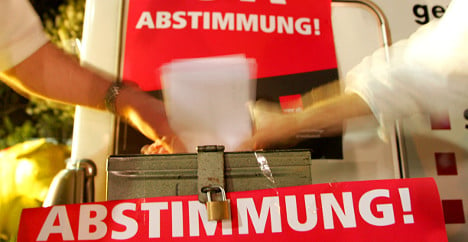 In a survey by the pollster Emnid commissioned by Bild am Sonntag newspaper, 47 percent of people backed compulsory voting, compared with 49 percent against it.

The survey comes as Germany goes into what experts predict could be the lowest turnout ever in a parliamentary election this Sunday. Some 77.7 percent of eligible voters took part in the 2005 election of the Bundestag, the lowest so far.

The proportion in favour was higher in the formerly communist eastern German states with 52 percent backing a compulsory vote compared with 46 per cent in the western half of the country.

Peter Lösche, a political scientist with Göttingen University, said he wouldn’t be surprised if the turnout dropped three or four percentage points further on Sunday and could even go as low as 70 percent.

He said the Emnid poll result was “amazing.”

He warned that the falling turnout was a worry, as disillusioned voters could be prey for radical political groups such as the far right. However he added that Germany’s participation rate was still much higher than most countries.

The German turnout to the June European Parliament election was a woeful 42.2 percent, which was the lowest since those elections began in 1979.

Emnid surveyed about 500 people in the past week who are aged 14 or over and would therefore be eligible to take part in the 2013 Bundestag election.

Some 32 countries now have compusory voting, though only 19 enforce it, among them Australia, Turkey and Singapore.