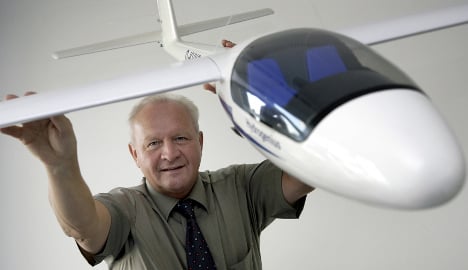 The IFB's Professor Voit-Nitschmann shows off a model. Photo: DPA

The competition, sponsored by NASA and the Comparative Aircraft Efficiency Foundation, is offering a $1.65-million prize to the first plane that exceeds an equivalent fuel-efficiency of 100 kilometres per litre. The aircraft will need to fly a minimum of 320 kilometres at a minimum speed of 160 kilometres per hour – in addition to meeting stringent safety and noise requirements.

“We will go to America in order to win,” leader of the IFB team Professor Rudolf Voit-Nitschmann said in a statement on Wednesday.

Elite universities and institutions will likely enter bio-fuelled and hybrid-powered planes into the competition, which ends in July 2011.

The Hydrogenius aircraft will be equipped with a lithium battery and electric motor. The team believes that new energy-saving techniques will help the electric motor challenge conventional motors. It is eco-friendly and has the advantage of high energy efficiency and minimal sound output.

But the IFB team still requires a considerable sum of money in order to take their aircraft to America.

The research into the electric powered aircraft has so far been financed by government grants, Baden-Württemberg’s Ministry of Science and a number of private sponsors. Among these was Stuttgart Airport, whose director Georg Fundel praised the opportunity to “strengthen our state’s position at the very head of cutting-edge technology.”

The IFB is working together with the Slovenian small aircraft firm Pipistrel in order to build the aircraft. Construction of the Hydrogenius began on Saturday.

The competition is scheduled to take place at the Charles M. Schulz Sonoma County Airport in Santa Rosa, California.