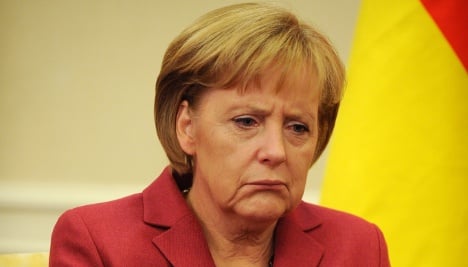 At one point during the bitterly contested US presidential election in 2000, American officials spent countless hours examining the so-called “hanging chads” from punch-card voting machines. The little bits of paper invalidated countless votes in Florida and arguably changed the outcome of the election.

In the end, the quirks of the US electoral system allowed George W. Bush to win the presidency while losing the popular vote – a situation Germany’s Angela Merkel could also face on Sunday evening.

The conservative Christian Democratic (CDU) chancellor hopes to ditch her loveless grand coalition with the centre-left Social Democrats (SPD) for the pro-business Free Democrats (FDP), but opinion polls show support for a solid CDU-FDP majority melting as Election Day nears. The centre-right alliance could, however, still eke out a victory with the help of Germany’s own brand of democratic quirkiness.

Merkel’s potential hanging chads are called Überhangmandate – literally “overhang mandates,” which are extra seats in parliament that have been determined to have an unconstitutional impact under certain arcane circumstances.

The oddity of Überhangmandate occurs because Germans actually have two votes: one for a specific parliamentary candidate for their district and one for the political party of their choice. This split of direct and proportional voting means a party can win more direct parliamentary seats in one of Germany’s 16 federal states than its share of the proportional vote would normally provide. In order to not disadvantage either the direct candidates or the parties, this means the Bundestag frequently has more MPs than the 598 it actually should.

This spawning of extra seats can even lead to distortions allowing a coalition to have parliamentary majority despite winning less than 50 percent of the popular vote. In recent weeks, German commentators have been aflutter at the possibility of Merkel’s conservatives forming a government with the FDP on just such a dubious foundation.

Predictably, politicians have been divided along party lines on the topic, with conservatives making the case for the legitimacy of majority propped up by extra seats and the left-wing warning against its damaging effect on German democracy.

Former Chancellor Helmut Kohl called the Überhangmandate discussion “idiotic” this week, and dismissed any suggestion fellow Christian Democrat Merkel would have to govern with an inferior parliamentary majority.

Though it would indeed be perfectly acceptable under current law, Germany’s Constitutional Court last year ordered legislators to change the country’s electoral rules by 2011 to eliminate the detrimental effects of so-called “negative vote weighting” related to Überhangmandate in future elections.

“The court made a legally correct decision, but politically it’s a disaster,” the SPD’s interior policy expert Dieter Wiefelspütz told Der Spiegel magazine. “It will create a massive democratic problem.”

The court ruling could put Merkel in the rather difficult spot of forging a conservative-FDP coalition that is legally bound to make sure no future government ever achieves an oddball majority like its own. Would this leave her government with a serious legitimacy deficit in the eyes of many German voters? Quite possibly.

She certainly would not have much of a mandate for contentious health, education and welfare reforms that have been put on hold due to ideological differences between her conservatives and their current Social Democratic coalition partners. But continuing with the status quo of grand coalition gridlock might not be much more appealing to Merkel either.

At the very least, Germans use paper ballots rather than punch-card voting machines, ensuring nobody will be forced to count any errant chads on Monday morning.