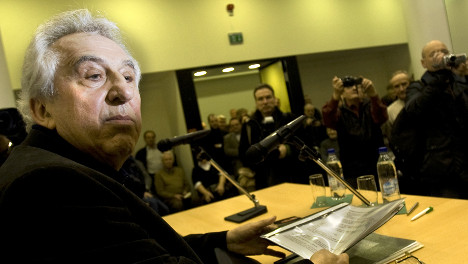 “I am still optimistic and cannot believe that capitalism, with all the crises it generates, can be history’s very last word,” Krenz, still sprightly at the age of 72, told reporters on Thursday.

Krenz took over from long-term communist leader Erich Honecker on October 18, 1989, as the regime vainly sought to regain control of a country engulfed in a peaceful revolution that brought down the hated Berlin Wall just three weeks later.

Eleven months on, communist East Germany, also known as the German Democratic Republic (GDR), was a thing of the past as it merged with West Germany to form a single country.

But inequalities remain between the two halves of the country.

Just ahead of the twentieth anniversary of the fall of the Wall, unemployment is twice as high in the east, and eastern German towns are losing their youngest citizens as they seek work elsewhere.

“We’ve achieved quite a few things in reunified Germany, like building roads, motorways, and renovating town centres,” Krenz said. “But at what price? Freedom without work isn’t freedom,” he added. “Today’s walls in Germany are those separating the poor from the rich.”

He also had some sharp words for Germany’s current Chancellor Angela Merkel, who grew up in the GDR, saying she has been “bad” for the country.

But he took pleasure in pointing out that she once belonged to the communist youth organisation (FDJ) when she was growing up behind the Iron Curtain.

In Sunday’s general election, which is expected to give Merkel a second term, he said he would vote for socialist party The Left, a party made of former GDR communists and defectors from the centre-left Social Democrats (SPD).

“I back its programme, so you know how I’ll be voting,” Krenz said.

Since its creation in mid-2007, the party has emerged as a major force in German politics, particularly in the former east, taking seats in 11 of the 16 state assemblies as well as in the federal parliament, the Bundestag.

Opinion polls suggest The Left will gain between 10 and 12 percent of the national vote on Sunday.

Krenz stepped down in December 1989 and spent four years in prison after reunification for his part in the GDR’s shoot-to-kill policy against those trying to flee the country.

He expressed regret for this, saying that “any death at the border was one too many.”

But the Wall was a result of the division of Europe between two opposing blocs and of a “Cold civil war” between the two Germanies, he said.

“If Hitler hadn’t seized power, Germany wouldn’t have been divided and the Wall would have never been,” he added.

Recalling the night when the Berlin Wall fell, when thousands of East Berliners rushed border crossing points, Krenz said Germany was very lucky that no one was killed.

“To this day I’m grateful to the armed forces that there was no blood-letting,” he said.