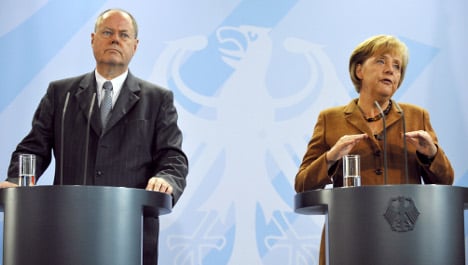 “We need rules – for every product, every trading location, and for every institution,” Merkel told public broadcaster Bayerischer Rundfunk before heading to Pittsburgh, Pennsylvania.

She warned against failing to overhaul the world’s financial framework at the summit of the leading industrial and developing economies amid a tendency forget how dire the market meltdown really was last year.

“Banks are already saying allow us to do our thing and the economy will grow just fine again,” Merkel said. “And that’s why more than anything I’d like to achieve one thing in Pittsburgh: That no bank can become so big that it can again blackmail nations.”

Merkel said at a press conference in Berlin ahead of her flight that she would resist moves by other countries, including the United States, to shift the focus of the meeting on Thursday and Friday to imbalances in the global economy, including Germany’s trade surplus.

“Pittsburgh will be a decisive milestone in determining whether financial market regulation remains a central issue,” Merkel said.

US President Barack Obama used an interview with US television network CNN on Sunday to criticise Germany and China, the world’s two biggest exporters, for exporting much more than they import.

“We can’t go back to the era where the Chinese or the Germans or other countries just are selling everything to us,” Obama said.

“We should not be looking for ersatz issues, so to speak, while forgetting about financial market regulation,” Merkel countered, adding that Germany has been “an incredibly important stabiliser” during the global recession.

“In my opinion, if you want to do something about imbalances then you should allow free global trade,” Merkel added, citing “protectionist tendencies, and I could think of a few.”

German Finance Minister Peer Steinbrück went further, telling the same news conference: “If you want to talk about balances, then without limits, and that means the US (trade and budget) deficits and the enormous resulting capital inflows that have to enter the United States to cover these deficits.

“I have nothing against bringing it up (in Pittsburgh) but we are touching on very wide-ranging issues,” Steinbrück said.