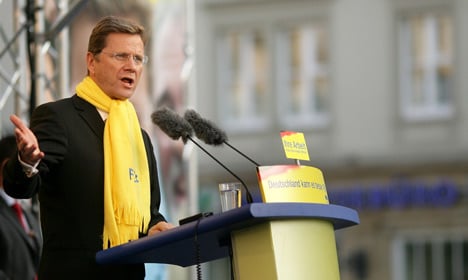 The head of Germany’s biggest opposition party used to make headlines for moving into TV’s Big Brother house for a few hours, painting his party’s election goal on the soles of his shoes, and coming out of the closet.

But the 47-year-old lawyer who was often the life and soul of the party has few laughing now. The FDP’s strength will likely decide whether Merkel can win re-election with her coalition of choice in the September 27 poll.

Westerwelle’s pro-business Free Democrats (FDP), frequent partners of the conservative Christian Democrats over half a century of post-war politics, are keen to play kingmakers again.

After 11 years in the political wilderness, Westerwelle has shaken off his at times foppish image and says he is ready to be the country’s first openly gay top diplomat.

“Of course I made some mistakes when I was young but one grows older and wiser,” he told AFP in an interview earlier this year when asked about his more memorable publicity stunts.

“But the Germans seem to see us positively—otherwise they wouldn’t have given us one of the best results in our history at the last national election.”

Since that 9.8-percent score in 2005, the FDP has seen its support soar at times to within four points of the Social Democrats, Germany’s oldest political outfit and the junior partner in Merkel’s “grand coalition.”

Their success also comes despite the economic crisis, when voters might be expected to be more sceptical about the FDP’s platform of lower taxes and slashed welfare payments.

The sharp-tongued Westerwelle, seen as one of parliament’s most gifted debaters, has fought to strip his party of its yuppie image and touted a slimmed-down tax policy he says will boost the middle class.

He did his part to liven up a television debate with the top opposition candidates this month, the night after a soporific “duel” between Merkel and her challenger, Foreign Minister Frank-Walter Steinmeier.

Westerwelle says he stands by the “basic tenets” of post-war foreign policy, but cites non-proliferation, including a withdrawal of the up to 150 US nuclear warheads stationed in Germany since the Cold War, as a priority.

He dismisses concerns raised in the media about whether his homosexuality could pose problems if he became Berlin’s chief ambassador.

“Some other countries may have had a problem with the fact that Angela Merkel became the first female chancellor of Germany. Of course she does not wear a veil on the red carpet when she visits certain Arab states,” he said.“The decision as to who we send as a government representative rests solely with us Germans based on our political and moral standards.”

Westerwelle had his official coming-out when he attended Merkel’s 50th birthday party in 2004 with his partner, businessman Michael Mronz. They are still a couple.

As for his stint on reality TV and the bright yellow “18” he used to paint on the bottom of his shoes for the FDP’s targeted electoral score, Westerwelle said Germans appreciated a politician who did not take himself too seriously.

“Maybe the Germans aren’t as uptight as people abroad sometimes think,” he said with a smile.