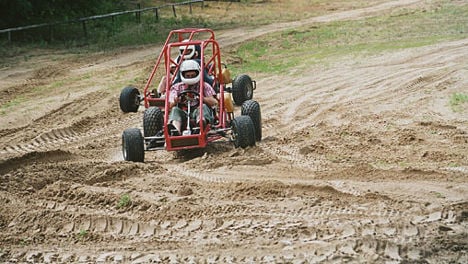 For one villager, Peter Sombert, the collapse of the GDR, or the communist German Democratic Republic, transformed his working life in the 500-resident lakeside town just 50 kilometres outside of Berlin.

“I used to spend long periods at the lake, just fishing. It was great back then, when the catch was subsidized. You didn’t need to make a name for yourself, just fish and sell,” he said. During the GDR years, almost every local family had a guest room advertised, hosting altogether as many as 70,000 visitors each year.

Things haven’t been bad for him after the borders were opened, though. Mr Sombert just had to adapt to the town’s evolving asset – tourist appeal. He now owns a successful smoked fish stand near the beach.

Kallinchen has been a popular vacation spot since the 1920’s, when tourists flocked to the local nudist camp, which some consider to be among the first centres of the German Freikörperkultur (FKK), or “free body culture.” Though it was shut down by the Nazis, it re-emerged during East German regime and remains a popular FKK meeting point.

The nudist camp is not the only tourist attraction in the town to have experienced a transition during the years of East Germany Not too far from Sombert’s fish shop stands the Teltow-Fläming-Ring (TFR) – a complex of racing tracks, off-road driving areas and even a climbing wall.

Now used for police training when it’s not being enjoyed by the many visitors to the area, the TFR was once used by the feared East German secret police, the Stasi – including communist leader Erich Honecker’s bodyguards – for driving practice.

“We could just hear the squeak of the tyres and see the buses that transported people to the training,” recalled local resident Reinhard Schulz. The Schulz family owned the “Alte Krug” restaurant at the time, and hosted many Stasi members for lunch at the time.

The track was used for more than driving, though. The Stasi also used the area to act out and analyse assassination exercises for the Red Army Faction (RAF), an extreme terrorist communist organisation in West German, also known as the Baader-Meinhof Group.

People in the local area allegedly knew nothing of the Stasi activities there. The officers would seal off the area and transport participants in buses with drawn curtains.

Nowadays, the 300-hectare TFR is still a busy place. On its list of users stands everything from big companies, to the Potsdam state chancellery and even the Federal Government. It also has recreational facilities like a climbing wall and off-road vehicle track that are frequented by families on vacation.

“Many of our guests have gone on their foreign holidays, yet remember and return to Kallinchen,” said TFR Director Bernd Hinkel.