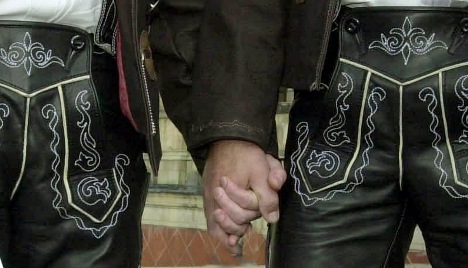 The now traditional Gay Sunday at Munich’s Oktoberfest started with a misunderstanding.

“When I first heard from the Munich Löwenclub (lions club), I thought of footballers,” remembers gastronomist George Heide, host at the Oktoberfest Bräurosl tent. “It wasn’t an altogether unpleasant surprise when men in black leather appeared.”

These men were members of the gay fetish society Münchner Löwenclub (MLC), who wanted to hold their traditional Oktoberfest meet.

Since the 1970s, this meet-up has been a big event. On the first Sunday of the Oktoberfest each year, the Bräurosl is packed from nine in the morning to eleven at night.

The rush is so great that many guests, who haven’t reserved, queue outside the tent from early in the morning. For Heide, Gay Sunday is now a roaring success.

When the MLC celebrated in another tent, there was trouble with the host, reports Bernd Müller, Spokesperson for MLC. The host no longer wanted to permit such revelry and refused the gay fetishists a reservation. Arriving at the Bräurosl, the men were warned they wouldn’t be allowed to run riot.

“We tap the men on the shoulder when things are getting a bit wild. We used to have some rowdiness, but things have improved,” said Heide.

In general, homosexual and heterosexual guests at the Munich festival get along well. However, there have been exceptions.

“We warn guests to be careful on the way home, not to make out in the streets or chat up straight men. When everyone’s a bit merry off too much beer, it isn’t always completely harmless,” added Heide.

Gay Sunday is not the only event for the gay community during the world-famous Oktoberfest. For those who miss the event on Sunday, there’s also “Pink Monday” the next day, along with a string of others throughout the festival.