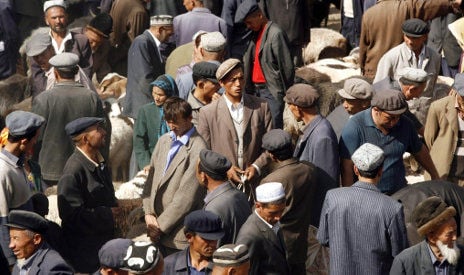 Uighurs at a market in the western Chinese province Xinjian. Photo: DPA

The prisoners, who belong to the predominantly Muslim ethnic Uighur group from Central Asia and the Xinjian province of Western China, cannot currently be repatriated to China due to American law, which dictates individuals may not be deported to a country where they are likely to face harm.

With plans still on track to close the prison by January 2010, the American government has been looking for somewhere to send the Uighur inmates after their release.

If returned to China, the men will likely be imprisoned and tried as active separatists. They have expressed fears that they could face torture or persecution, according to reports from the New York Center for Constitutional Rights.

But the Chinese government has insisted the detainees face trial back in China.

“These Uighurs are Chinese citizens and therefore fall under the responsibility of Chinese justice. They are members of the radical Islamist movement in East Turkestan, which the United Nations recognises as a terrorist organization,” Wu Hongbo, Chinese ambassador to Germany, told the Berliner Zeitung.

“They were trained at a military terrorism camp, and captured during a military exercise. We have therefore encouraged the US administration to release them to China,” he continued.

But Munich had been suggested as a possible destination for the displaced prisoners, due to the 500-strong Uighur community living in the city already – one of the group’s largest enclaves outside of Asia.

The city’s municipal council was reported to have backed a motion earlier this year to host 17 Uighur prisoners released from Guantanamo Bay, but Federal Government ministers, including Interior Minister Wolfgang Schäuble, have appeared hesitant to accept the prisoners, expressing fears that to do so would put a strain on German relations with China.

“I am quite sure that the German Federal government has a clear view of the situation, and understands the significance of this question for our relationship,” Wu stated.