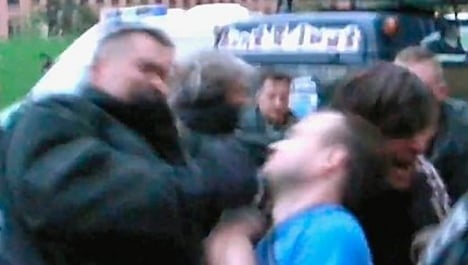 Both officers are accused of needlessly attacking a participant at a protest against government infringement of Germany’s data protection laws.

A witness filmed the incident and posted it online for all to see a man “who did nothing and was laid into” by the police officers, police spokesperson Frank Millert told news agency DDP.

Other officers and demonstrators who witnessed the attack are being questioned, another spokesperson, Thomas Neuendorf, said.

“We have a huge interest in clearing this up,” Neuendorf said, adding that misconduct would “not be tolerated.”

The video shows an officer hitting a man in the face before several other officers help pull him to the ground with more punches and kicking. Another man caught in the middle of the scuffle sustained a bloody nose.

The 37-year-old victim’s lawyer, Johannes Eisenberg, rejected police descriptions of the event, which said his client had defied officers. According to the lawyer, the man had been witness to a “disproportionate show of police violence” against a woman, after which he requested the officer’s identification. The officer denied his request and asked him to step off of the street. Eisenberg said his client complied, but was then attacked by the officer.

Eisenberg also alleged that officers abused his client while he was in a police tansporter after the incident.

The event under the motto “Freedom instead of fear – stop the surveillance madness,” was attended by some 10,000 participants, though organisers said more than 20,000 were on hand to protest laws that enable authorities to shut down websites and hold users’ personal telephone data. The event, part of a series held around the world, was called by a coalition of 167 organisations – including political parties, trade unions, professional associations, capitalism critics Attac, and the Chaos Computer Club.