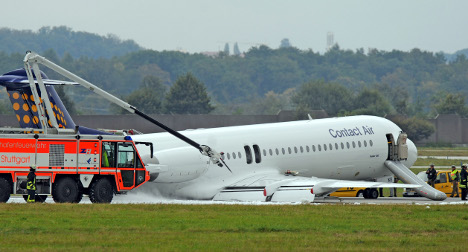 The 13-year-old Fokker 100 plane travelling from Berlin to Stuttgart for the Lufthansa subsidiary apparently had problems fully extending its landing gear, causing a major alert at the airport.

“It was serious, a very serious situation,” the 69-year-old Müntefering said. “We circled for a long time, tried the descent and then had to crash land.”

Emergency rescue staff sprayed flame-retardant foam as the plane landed at 10:49 am in a spray of sparks. Police called it a “fortunate ending” to the emergency.

The 73 passengers and five crew members exited the plane via emergency slides. One passenger and a flight attendant were slightly injured, though authorities said several people suffered from shock. Passengers were given the opportunity to meet with therapists after the incident.

Authorities closed the Stuttgart airport runway to remove the plane and said it was unlikely to re-open before evening. Serious flight delays and cancellations are expected.

Meanwhile SPD General Secretary Hubertus Heil said Müntefering, who had been scheduled to take part in a campaign rally, still made it to his engagement on time.

The politician held a speech and posed for photos at a pavilion in Stuttgart’s Feuerbach district – though media reports said he looked pale.

“Once in a lifetime is enough,” he said, adding that passengers on the plane were calm as the pilot explained their situation. “One looks at the world and finds it good.”

“Our thanks go to the captain, who performed with mastery, and his crew, who handled the situation professionally,” he said, joking that the landing was “softer than with wheels.”

The SPD politician plans to fly to his next engagement on Monday evening, he said.