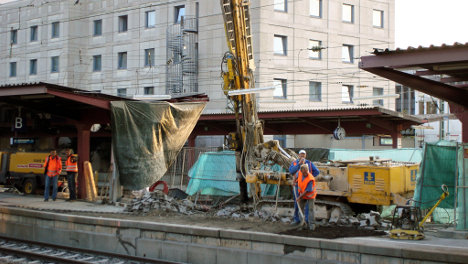 The construction site where the bomb went off in Ulm. Photo: DPA

“They were drilling in the ground for the construction of a new pedestrian bridge at the station when the bomb exploded about six to seven metres below ground,” police spokesperson Michael Glöckler told The Local.

At first both workers at the Hauptbahnhof were thought to have only suffered a shock from the surprise incident around 7:50 pm on Wednesday evening, but later one worker decided to seek outpatient treatment for undisclosed injuries.

“You wouldn’t be able to tell that a bomb went off there by looking at the area,” Glöckler said, adding that police had not yet determined the financial extent of damages.

An explosive ordnance disposal company – a service under the jurisdiction of state police in Baden-Württemburg – had conducted a safety check of the area before construction began and gave their approval for workers to break ground.

“The investigation is in the early stages and I can’t say whether anyone will be held responsible,” Glöckler said.

Platform 1 at the station remained closed until 9 am and several trains were delayed, he added.

In the final months of the war, Ulm was a frequent target for allied bombing raids.

More than 60 years after the end of World War II, entire neighbourhoods are still often evacuated for weapons recovery in Germany. Allied forces dropped more than 2.7 million tonnes of explosives across Germany during the war. Some of the ordnance did not explode and has become increasingly dangerous with time and corrosion.

The last major find was a 250-kilogramme British aerial bomb found at a military facility in Hannover in July. Thousands of nearby residents were evacuated while experts detonated the bomb, which was too unstable to move.