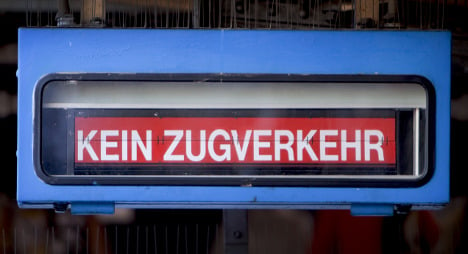 After another safety scandal left just 25 percent of the fleet in service this week on top of an already reduced schedule, the Berlin city government said it will give the company just a €5 million of its usual €20-million monthly payment in September.

Wowereit also said the company had been “trimmed for profit” and scandalously lost sight of safety concerns at its subsidiaries like the S-Bahn.

Parliamentary liaison to the Transportation Ministry Achim Großmann divulged that he asked a recent board meeting when “circumstances appropriate to western civilisation would again prevail.”

Delays and reduced service began on July 20 to inspect faulty train axles after a derailment. Service wasn’t expected to return to normal until December when this week the company announced a problem with brakes that needed immediate attention – cutting service again by 75 percent.

The paper also alleged it had gathered evidence that S-Bahn workers had intentionally filled out safety forms incorrectly to say that brake parts had been replaced, even though they had not actually been repaired.

The debacle will likely tear a dangerous hole into Deutsche Bahn head Rüdiger Grube’s 2009 budget, in addition to destroying his political credibility, the paper said.

Berlin state prosecutors are also investigating S-Bahn executives over the mismanagement that led to the chaos. S-Bahn boss Tobias Heinemann and other members of the company’s executive board were accused of consistently ignoring train maintenance schedules and allowing damaged wagons to return to service unrepaired. He and three others were replaced on July 2.