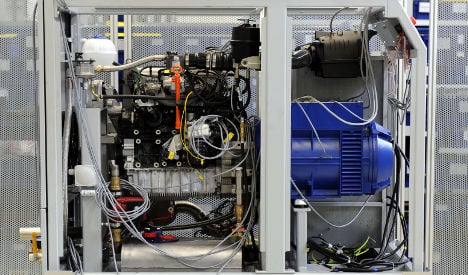 The Hamburg-based renewable energy group Lichtblick and its partner the automaker Volkswagen say the plants would produce not only heating and hot water but also electricity, with any excess power fed into the local grid.

The two firms said the concept of SchwarmStrom (literally, “swarm power”) would allow Germany to abandon nuclear and coal power stations sooner and help compensate for the volatility of renewables like wind and solar power.

The plants also reduce harmful carbon dioxide emissions by up to 60 percent compared to conventional heat and electricity generation, they added in a joint statement.

In the coming year the programme will install 100,000 of the mini plants, producing between them 2,000 megawatts of electricity, the same as two nuclear plants, Lichtblick and VW said.

“SchwarmStrom is revolutionising power production in Germany. It clears the way for more renewable energy and an exit from power from nuclear and coal,” the statement added.

The project “is thoroughly feasible if the project reaches the forecast size,” Claudia Kemfert of the DIW research institute told AFP news agency.

She added by way of comparison that “just getting rid of incandescent light bulbs would be the same as shutting down one nuclear reactor.”

Gas plants have an advantage over nuclear power stations in that the heat produced by the latter is wasted, the DIW energy expert said.

But “the most ecological would be to feed these mini-plants with biogas” rather than natural gas, Kemfert noted.

Lichtblick said another advantage of its plan was that tens of thousands of generators could be mobilised to meet a surge in demand or if drought made it hard to cool nuclear plants or a calm spell idled wind turbines.

VW will contribute to the project by providing a gas-powered engine similar to one used in its popular Golf model.

But LBBW auto analyst Stefan Sigrist told AFP: “This is mainly a marketing offensive. It is chic for VW to bask in a greener light.”

Although the generators are not a new concept, the project is novel in that Lichtblick would retain control over the plants after their installation.

Households would pay around €5,000 ($7,250) to have the generators set up along with an appropriate heating system.

But individuals would then pay a lower price for heating and receive a modest “rent” for hosting the generator, as well as a bonus at the end of the year calculated on electricity revenues that resulted from Lichtblick‘s sales.