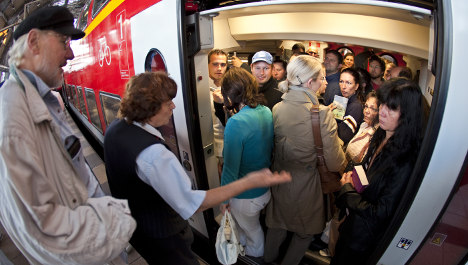 According to the company on Monday evening, new safety concerns meant that brake cylinders needed to be immediately replaced in the majority of their trains.

A spokesperson said that a provisional schedule would be created on Tuesday and a new timetable offered by Wednesday morning.

S-Bahn lines still running regularly on Tuesday include the so-called Ringbahn, which circles the outskirts of the city in both directions, and three north-south lines. The rest of the trains will be running irregularly and with long delays. There will be no trains running east to west between Alexanderplatz and Westkreuz, or between Wannsee and Spandau.

The commuter chaos comes after another safety issue this summer erupted when federal railway regulators ordered national railway operator Deutsche Bahn, which manages the service, to pull nearly three-quarters of all the commuter trains for wheel repairs after a train derailed on May 1.

The near total breakdown in service increased calls on Berlin’s transport minister, Ingeborg Junge-Reyer, to renegotiate the city’s contract with DB, worth €225 million.

Meanwhile Berlin state prosecutors are investigating S-Bahn executives over the mismanagement that led to the current chaos. S-Bahn boss Tobias Heinemann and other members of the company’s executive board were accused of consistently ignoring train maintenance schedules and allowing damaged wagons to return to service unrepaired. He and three others were replaced on July 2.