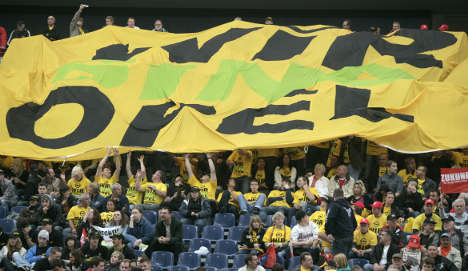 The IG Metall blue-collar union rally in the Commerzbank Arena attracted workers from around the country, with organisers arranging around 1,000 buses and ten special trains to transport them to the rally.

Speakers called for secure jobs, better conditions and more power for workers’ councils, yet specifically avoided endorsing any political party, even though the election is three weeks away. The unionists are split between those who still support the centre-left Social Democratic Party and the hard-line socialist Left Party, which reportedly attracts support from as many as a third of IG Metall members.

The union created political waves when it declined to back the SPD a few weeks ago, and the party stayed away from the rally.

On stage, normal employees addressed the arena to talk of their everyday fears of losing their jobs and of having to cut down on family activities in order to make meagre wages cover the bills.

Berthold Huber, head of the union also spoke to the crowd to warn against the potential coalition of Christian Democratic Union and Free Democrats, saying the FDP wants to do away with the social state.

He said that the economic crisis should show neoliberal policies must be rejected – and received thunderous applause.

Large contingents of Opel employees attended, voicing their fears for the future, while after the speeches musicians, including Bob Geldof, entertained the crowd.