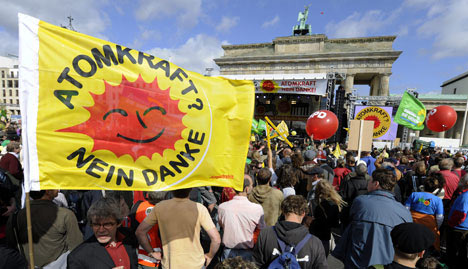 The marchers, backed by 400 tractors, demanded that Germany stick to its commitment to close all nuclear plants by 2020 and also called for the closure of a radioactive dump at Gorleben in eastern Germany.

The police refused to give an estimate of the crowd but organisers – ranging from the Greens to members of the Protestant church – put the figure at 50,000 people, marching from the Berlin train station to the Brandenburg Gate.

The protest included a group of famers from Lower Saxony who have driven their tractors from the nuclear waste sites at Gorleben and Wolfenbüttel to the capital.

The issue of nuclear power has slowly become more prominent as the election nears and while information has been released about the poor conditions at the Asse nuclear waste site near Wolfenbüttel, as well as repeated shut-downs of some older nuclear power stations such as that at Krümmel.

Germany decided in 2000 under former chancellor Gerhard Schröder’s Social Democrats (SPD) and the Greens – when current German leader Angela Merkel’s conservative party was in opposition – to mothball its 17 reactors by 2020.

The SPD is currently in coalition with Merkel’s conservatives, but members of her CDU party want to look at extending the life of some reactors, which produce around 30 percent of German power. This view is also shared by the party that Merkel wants to govern with after the September 27 elections, the pro-business Free Democrats (FDP). Opinion polls indicate the two parties will attract enough votes to form such a coalition.

“The end of nuclearisation has been promised since a long time but up until now nothing has been done,” said Jochen Stay, a spokesman for the march organisers.

Germany’s Environment Minister Sigmar Gabriel, a Social Democrat, said Merkel’s conservatives should “stop being the right arm of the nuclear industry,” adding that “the future belongs to renewable energies.”

According to a Greenpeace study released Saturday, more than half of Germans want the coming government, regardless of its political persuasion, to continue the closure of the country’s nuclear power stations.

The survey, commissioned from TNS Emnid by Greenpeace showed that 59 percent of those asked rejected the idea of extending the lifespan of older nuclear power stations that is currently being considered.

This share is the same across east and western areas of the country, while those who support the Christian Democratic Union and the Free Democratic Party are less positive, with 50 percent of the former and 49 percent of the latter expecting the next government, due to be elected on September 27, to take the country away from nuclear power.