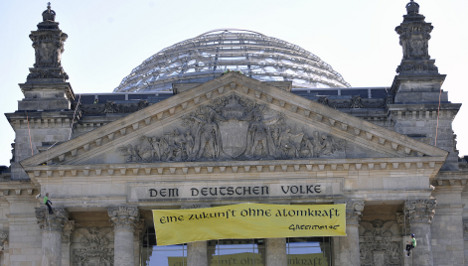 Some 15 activists hung the banner just below the famous inscription, “Dem deutschen Volke,” above the entrance. The banner continued the phrase with “…eine Zukunft ohne Atomkraft,” forming the sentence, “A future without atomic energy for the German people.”

According to police, thousands of tourists looked on as two activists climbed the columns to hang the banner and were later forced to step into a fire truck basket crane and come back to earth.

“The action ended peacefully and without injury,” a police spokesperson said.

In a statement on their German website, Greenpeace said the action was to emphasise that the German people are sovereign, not corporations profiting from nuclear energy.

Greenpeace has called on supporters nationwide to show demonstrate against nuclear energy this Saturday.

Nuclear energy is deeply unpopular in Germany activists often stage protests at Gorleben, which is in the German state of Lower Saxony. The government has approved plans to get rid of its reactors by 2020. But high energy costs and climate change concerns have some politicians second-guessing the plans.