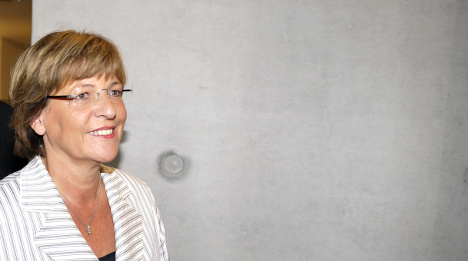 Schmidt leaves the committee meeting with a smile. Photo: DPA

Politicians did not reach a consensus to pursue the affair, committee leader Otto Fricke told journalists late on Wednesday.

Opposition parties wanted to investigate the minister’s headline-grabbing conduct, but grand coalition parties the Christian Democrats and Schmidt’s own Social Democrats spoke against taking the matter any further.

Schmidt renewed her defence of the criticism after the meeting.

“The guidelines were correctly maintained,” she said of her trip to Spain, though she added she would not make the same choice again due to the fierce debate that followed.

“I assume that after today we can return to the business at hand,” she said.

Although she had flown to Spain on her own cost, the seeming profligacy of getting her €90,000 armoured Mercedes S-Class to meet her there on several vacations was a topic for debate and argument, particularly during an economic crisis.

After the Federal Court of Auditors cleared her of misuse in a preliminary report in early August, SPD chancellor candidate and current Foreign Minister Frank-Walter Steinmeier took her onto his election team.