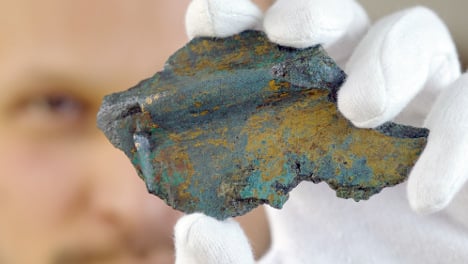 File photo of a recent bit of the statue found by archaeologists. Photo: DPA

“There has never been a find of such quality and preservation in Germany,” a statement from the ministry said, adding that it was a “sensational” discovery.

On August 12, archaeologists pulled the gold-gilded, life-sized head of a horse and a shoe of the emperor – who ruled the Roman Empire between 23 BC and 14 AD – from a stream in what was once the Roman outpost Germania Magna. Experts there have uncovered several bits of the statue among some 20,000 artefacts uncovered at the site in recent years.

Scientists from the University of Jena believe it may have been destroyed by Roman soldiers retreating after the legendary Varusschlacht, or the Battle of the Teutoburg Forest in 9 AD, when Germanic tribes ambushed and wiped out three Roman legions. As the remaining Roman troops retreated after the devastating defeat, they destroyed most of what they could not take with them.

“Due to the location of the find, there is a unique possibility to date the statue to a few exact years and establish a connection to the events surrounding the Varusschlacht 2,000 years ago,” the statement said.

The ministry plans to make an official presentation of the find on August 27.