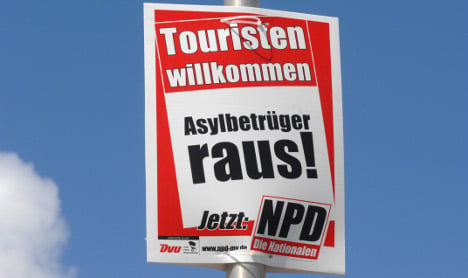 Apparently the NPD is open to taking money from tourists. Photo: DPA

The man had to be transported to the hospital in an ambulance, according to a police report on Monday.

The 46-year-old had stopped at a bakery with his wife and young son on Saturday, when the three NPD members, aged 20, 33 and 43, were handing out party leaflets. When the Brit tore up the leaflet handed to him, he initially prompted a calm discussion.

But according to information from the police, the trio soon pushed the man against the glass window of the bakery. As one man punched him in the chest, another sprayed pepper spray in his eyes.

After that attack, the three assailants fled the scene, but the police soon caught up with them nearby. The two younger men were already known to police for previous violent acts. The officers took information from them, but then let them go. The city’s state police are now investigating due to the serious injuries caused by the attack.

After another possible xenophobic attack by some 11 men on three foreigners occurred over the weekend in Taucha in the eastern German state of Saxony. The suspects, all young men between 18 and 22 years old, are reported to have attacked the foreigners after visiting a town fair.

After going for their victims, they began shouting xenophobic slogans at them. One 23-year old Lebanese man was thrown to the ground, hit and kicked. When two policemen intervened, the men attacked them as well, smashing up their patrol car.

But the authorities said on Monday they were still investigating the incident.

“The background in this case is still quite unclear,” a spokesperson for the Leipzig state prosecutor’s office told DPA on Monday.