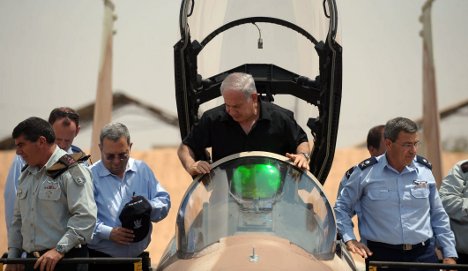 He will probably take a bigger plane Photo: DPA

The German government has followed Britain in backing envoy George Mitchell’s call for the settlement activity to be stopped, creating coordinated pressure on Israel from some of its strongest diplomatic allies.

Mitchell and others see Israeli concessions on the matter as crucial to jumpstarting Middle East peace talks.

Netanyahu will see his British counterpart Gordon Brown on Tuesday in London, where he will also meet Mitchell.

From there he will head on Wednesday to Berlin for talks with German Chancellor Angela Merkel, his office said.

Netanyahu’s spokesman Mark Regev said discussions with the British and German leaders were set to focus on bilateral ties and “matters of both regional and international significance.”

Mitchell has held intensive talks with Israeli officials in recent months amid a rare public row between the US and Israel after Washington demanded that Israel halt all settlement activity in the occupied West Bank.

Britain and Germany were among a chorus of states to back the US demand, seen as key for resuming Israeli-Palestinian peace talks, which were halted last December when the Jewish state launched a deadly offensive against the Hamas-ruled Gaza Strip.

“We and the United States have made clear how we see the settlements issue. It is one of the greatest obstacles to a two-state solution,” German foreign ministry spokesman Andreas Peschke said on Friday.

Although Israel insists on allowing construction in large settlement blocs, officials last week said that Netanyahu agreed to stop issuing construction tenders in the West Bank and annexed east Jerusalem until the beginning of 2010.

“In the last few weeks important progress has been achieved and we want to continue in that effort,” Regev told AFP.

Obama welcomed the move as a step in the right direction and again called on Arab states and the Palestinians to also take confidence building measures towards Israel.

Besides the Middle East peace process, Netanyahu’s talks with the European leaders are set to focus on efforts to halt Iran’s nuclear programme, which Israel and the West believe is aimed at developing an atomic bomb, a claim Tehran denies.

“We’ll be raising the threat to regional and international security posed by the Iranian nuclear programme and discuss with our European friends how best to meet this challenge and to prevent the Iranians from achieving military nuclear capabilities,” Regev said.

“Israel believes that the efforts to prevent the Iranian regime from going nuclear must be stepped up.”

Israel, considered the region’s sole if undeclared nuclear power, refuses to rule out military action against its arch enemy’s nuclear facilities and has carried out a number of military manoeuvres seen as a signal of its intentions.

It has called for tougher international economic and diplomatic sanctions against Iran.

Although Washington continues to seek a negotiated resolution of the nuclear standoff, the White House earlier this month threatened tough new sanctions if it misses a September deadline for starting talks.

Among the new sanctions being considered is an embargo on gasoline imports into oil-rich Iran which lacks domestic refining capacity, as well as a tighter economic isolation, according to media reports.

Germany is also said to play a key role in Egyptian-led efforts to broker a prisoner swap between Israel and Hamas, which has held an Israeli soldier captive for more than three years.

Egyptian President Hosni Mubarak said this month that the indirect talks between Israel and Hamas have been recently renewed with the help of German intelligence services.