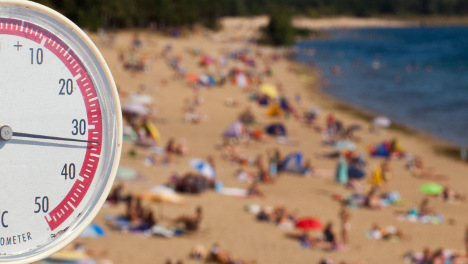 Meteorologists on Thursday measured 37.1 degrees Celsius (98.7 Fahrenheit) in the Baden-Württemberg city of Karlsruhe, making it the hottest day of the summer thus far according to a spokesperson from the German Weather Service (DWD).

The heat was most intense in the southwestern and western regions of the country, where the DWD issued a weather warning. Many weather stations in the country registered temperatures above 36 degrees Celsius.

But the “record hunt is ending,” the DWD spokesperson said on Friday.

Rain and possible severe thunderstorms in southern and eastern regions will greet Germans on Friday morning, but by afternoon temperatures could still reach up to 30 degrees Celsius in the east. The rest of the country will register temperatures between a comfortable 21 and 26 degrees Celsius.

Meteorologists expect temperatures will remain between a summery range of 25 and 30 degrees Celsius throughout the weekend with plenty of sunshine.