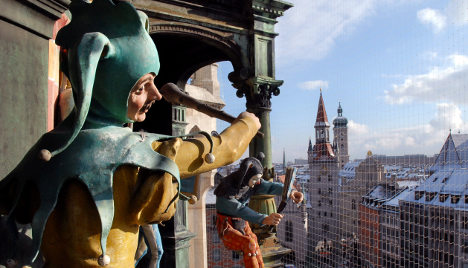 The mistake was discovered by two carillon experts, Stefan Duschl and Rainer Kühne. According to their findings, the 100-year old glockenspiel has been playing a C-sharp instead of a C since renovation work in 2007.

The pair became aware of the problem after being informed by another glockenspiel aficionado in early 2008. “He had tried to approach the town authorities, but nothing had changed since then,” Duschl told the paper. “A C-sharp is played instead of a C more than 40 times.”

To make matters worse, Kühne said a key part of the famous tourist attraction, the Schäfflertanz, was also badly damaged by hail.

“It’s inconceivable for something like this not to catch somebody’s attention,” Kühne added.

Duschl conceded the glockenspiel wasn’t playing well before 2007, but said it was at least in tune.

“During the renovation, the two tones, C and C-sharp, were swapped,” he added.

According to the government building’s office, a renowned expert checked the glockenspiel and its tuning after the renovation using a computer analysis of the instrument.

The in-house technician for the town hall told the newspaper, however, that upon completion of the renovation work in the autumn of 2007, up to ten notes were not tuned properly. Blame is being placed with the Dutch company, Eijsbouts, which undertook the renovation of the mechanism built in 2008, the newspaper reported.

“It would be interesting to discover whether the company had been contracted simply to tune the glockenspiel, or whether they should have restored its sound completely,” Duschl said.