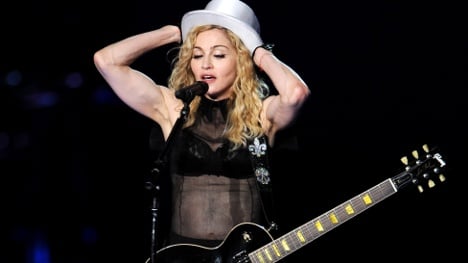 The show kicked off under an open sky at 9:30 pm, featuring stunning light shows, perfect dance routines and lavish costumes, to the delight of her German fans.

The legendary singer performed a mix of old and new hits, from “Holiday” to “4 Minutes,” reflecting her broad range of influences, including rock, hip-hop and even flamenco.

“What an entertainer!! Madonna is like a female Michael Jackson – a true legend!” Constanze Jelinek, one of the 35,000 fans at the show, told reporters.

The singer seemed determined to face her critics, showing off her fit physique by kissing her tensed arm muscles, and styling a female dancer as a double of herself in a wedding dress, before passionately kissing her as an apparent response to media attention over her divorce from Guy Richie.

“Anyone who can overcome so many scandals must really have something,” remarked spectator Charlotte Mager.

The party atmosphere was broken, however, by a political video played by the star, covering issues including poverty, climate change and child soldiers. The video also made a comparison between Hitler and Iranian President Mahmoud Ahmadinijad in a section covering dictatorship.

Later in the show, a Michael Jackson double suddenly appeared on stage in front of an image of the star as a youth on the screen behind. Madonna said the addition to her show was in honour of Jackson. Fans also left the stadium after the show to the sound of Jackson’s hit “Don’t stop ‘til you get enough” over the stadium’s sound system.

Despite the record box office takings of last year’s “Sticky and Sweet tour,” the Munich show was not sold out. Madonna continues her tour through Europe in the coming weeks, taking her show from London to Tel Aviv, ahead of the Autumn release of her ‘Best Of’ album.