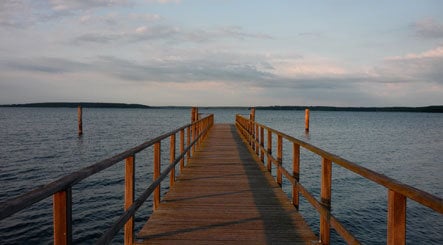 Coming from western Canada, one can get a real hankering for nature living in Germany’s largest city.

So though my husband and I weren’t expecting the wilds of British Columbia while travelling the 90 minutes it takes to get from Berlin to Mecklenburg-Western Pomerania’s lake district, we were pleased to discover a peaceful paddling getaway.

The area, known as the Mecklenburgische Seenplatte, is not far from the Brandenburg border, and home to a network of glacier-formed lakes and their connecting canals. Called the “land of a thousand lakes” by locals, it’s a perfect weekend escape from Berlin or Hamburg.

We first headed to the town of Plau am See, set on the shores of its namesake lake. For €100 a night, the Strand Hotel included breakfast and a private dock offering a breathtaking view of the tranquil lake that instantly erased all city noises from memory. Just outside of the town, the rural hotel also has Plau am See’s bowling alley and an onsite petting zoo, complete with baby goats. The main clientele were clearly the over-60 crowd, but was still a cosy inn experience.

Click here for a gallery of the lake district.

The Elde River cuts through Plau and connects it with the other lakes of the Mecklenburgische Seenplatte. But there are plenty of routes to get to the district, including one all the way from Berlin. We rented a canoe at the only place in town (€8 for two hours) and paddled up the quiet river, meeting slow-moving motor boats along the way.

The river is a peaceful paddle, but there’s not much to see along the way. While there were times we were the only ones on the water, the reinforced banks didn’t let us forget real wilderness can be elusive in Germany.

Plau am See’s restaurants all boast fish dishes, mostly bass, pike and trout. The Fischerhaus restaurant with its thatched roof lets visitors enjoy dinner along the banks of the Elde with fish cooked in the traditional German way – breaded and fried. Dinner there cost us €35 with drinks included. On a Sunday, the Hornung bakery is open all day and a good place to pick up supplies for a paddling picnic.

Making for the Müritz

The next day, we drove deeper into the lake country to the edge of the Germany’s biggest body of water in the region. At 112 square kilometers, the Müritz dominates the area and along the eastern shores, you’ll find the eponymous national park. The Müritz is busy with water traffic, including motor boats, Seadoos, sail boats and even houseboats. But the surrounding lakes without motorised watercraft are much quieter and perfect for canoers and kayakers of all skill levels.

From a small resort community called Müritz Paradies right on the Boeker canal in the park, we rented a two-person kayak from Müritz Kanu (€17 for half a day). We paddled in away from the Müritz to head to through the Caarp, Woterfitz and Leppin lakes. We were guided along the way by a trail of green buoys that led to the sometimes hidden canals through the reeds. As beautiful as the lakes were, it was these canals we liked the best. The water was extremely still and lined with forest on either side — where we even saw an eagle hunting.

It took us two hours to get across all three lakes and we stopped at the Zielitz campsite to enjoy our picnic, but for those who are less organised, there is a little snack bar. This is, after all, Germany’s version of “roughing it.” For those with more time, the chain of lakes goes all the way through to the Mirower Lake, where more campgrounds offer places to stay on several-day tours.

Unfortunately, there were no places to stop along the shores to share our picnic in a quiet place away from the car campers. The banks of all the lakes are covered in reeds, standing constant watch over the plethora of bird nests that line the shores. Still, the only other traffic we encountered were fellow paddle-wielding adventurists and families of swans, ducks and loons.

And before we went back to Berlin’s city life, we did manage to find a shallow beach. While too cold for us to get into the water, others enjoyed it while we watched the sailboats go by from the shores in a perfect end to our weekend escape.