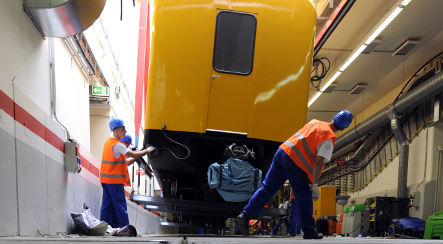 The U55 has earned the nickname of Kanzlerlinie, or Chancellor Line, because it runs under the government quarter in Berlin’s city centre to the central train station.

After the reunification of East and West Germany, city planners intended for the U55 to be an extension of the U5, which now ends at Alexanderplatz, through the government quarter and beyond to connect with the U9. But the plans turned out to be too ambitious and construction stopped in 1999 until the federal government gave the city of Berlin an ultimatum – finish the U55 or pay back millions in development funds.

But without enough money to build the entire line, Berlin cut corners, leaving unfinished “ghost stations” along the way. The finished product is the €320-million, 1.8-kilometre shuttle between the main train station and a new stop called Brandenburger Tor, named after Berlin’s most famous landmark just above the station, the Brandenburg Gate.

To make up for the U55’s shortcomings, the city of Berlin has outfitted the three stations with modern conveniences for tourists. The Brandenburger Tor station will serve as an information point for visitors, who will also be able to rent audio guides about the Berlin Wall, which used to divide the city just behind the monument at Pariser Platz. Computers will also direct hobby historians to information on the city’s past.

Berlin plans to spend another €433 million to extend the U55 underneath Unter den Linden to Alexanderplatz by 2017. Until then, the line may actually get more use than initially expected with S-Bahn lines running on emergency service due to train car safety checks. The checks have spun Berlin commuter traffic into chaos and turned the U-Bahn into the city’s preferred method of public transportation.