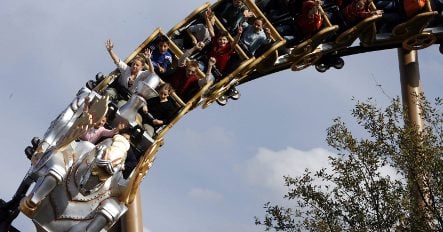 A children's roller-coaster in the Europa Park - not the one in Berlin Photo:DPA

The boy, who has not been named by authorities, but who lived in Berlin, was sitting on the ride next to his 10-year-old sister when witnesses say he suddenly collapsed.

As soon as the ride stopped he was pulled from his seat and several adults, including his uncle who is a trained paramedic, fought to reanimate him, according to a report in the Berlin newspaper BZ am Sonntag.

The paper reported that the boy and his sister were at the fair with their uncle and the partner of their mother when they decided to take a ride on the ‘Wild Mouse’ roller coaster, which although it travels at speeds of up to 50 kilometres per hour, is designed for children.

Jörg Müller-Richter, 57, was in the seat behind the two children and told the BZ am Sonntag, “The boy just collapsed during the ride. When the carriage stopped again he was already pretty grey. We carried him from the carriage and put him on the floor.”

The boy died despite the efforts of his uncle and the ambulance team which arrived at the scene in Dahlem, in western Berlin. No details have been released of his identity or nationality.

A post-mortem will be conducted and the police have removed the ride for inspection, despite assurances from the fest organisers that there was no technical failure.