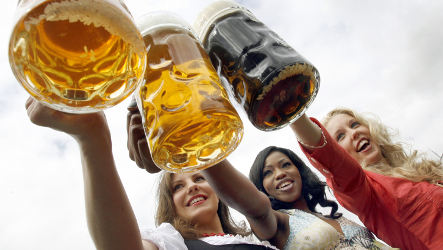 Daily newspaper Bild reported that Öko-test looked at flavour and ingredients of all its samples in the grading process, and 44 of the 46 beers were graded “very good.”

Those suffering from the recession will delight in knowing that even the “cheap beers” were graded well, such as the Original Oettinger and Sternburg Pilsener, which cost only 40 cents per litre.

When it came to pure taste, 38 beers were given top marks. The Ayinger Jahrhundert-Bier and Pinkus Special – both of which can only be found regionally – were the gold stars of the group. Only one beer, the Wicküler Pilsner, was put in the “satisfactory” category – the lowest mark available in Öko-test’s food and beverage rankings.

Beer lovers can also rejoice in knowing German brewers are putting the best ingredients in their beer. All but one beer, which had an incorrect alcohol percentage on the label, were given the “very good” score in the ingredients category.

The study concluded that there was little difference in quality between regional brands and internationally known brands like Becks, Bild reported.

Consumers can see the full results for all 46 test subjects in August’s Öko-test magazine.

The positive ratings come despite Thursday’s report from the Federal Statistics Office (Destatis), which showed a drop in beer sales for the first six months of 2009 to their lowest level since records began in 1991.