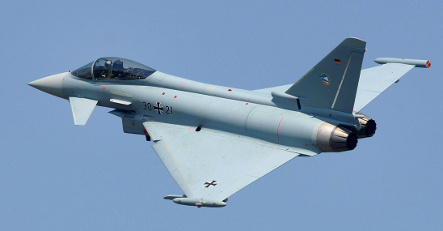 The consortium, which included Britain, Italy and Spain, finally inked the deal in Munich, bringing to an end a long delay as countries hesitated to splash out on military hardware in the midst of a crippling recession.

“NATO Eurofighter and Tornade Development, Production and Logistics Agency (NETMA) today signed a contract for the delivery of 112 Eurofighter aircraft in the name of the partner countries Britain, Germany, Italy and Spain,” the ministry said in a statement.

The Eurofighter is a multi-purpose combat jet developed by a European consortium comprised of the aerospace group EADS, BAE Systems of Britain and the Italian group Alenia/Finmeccanica.

The four partner countries in the consortium divided up work on the plane in 1998 according to the number of aircraft each planned to buy, with a total of 620 orders booked in three stages through to 2017.

The project, however, has been dogged by concerns over production delays and budget overruns, with each plane reported to cost in the region of €100 million.

To ease budgetary worries, an agreement was struck to split the third “tranche” of 236 aircraft, resulting in this order for 112 planes.

Raising doubts about the future viability of the project, Britain also threatened to pull out over concerns over a four-year delay in production.

Nevertheless, with the deal inked, the German defence ministry said the programme would “not only secure thousands of highly qualified jobs in the European aviation industry but also improve the export chances of the eurofighter.”