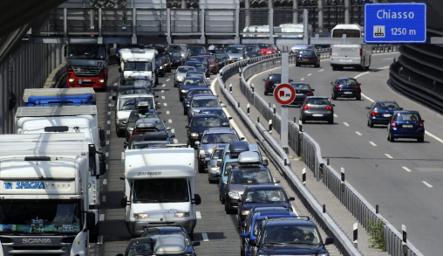 Schools in Bavaria and Baden-Württemberg begin their holidays this week, while students across much of northern Germany, including Lower Saxony and Saxony, go back to school next week. That means millions of German families will be coming and going all week, the ADAC traffic jam forecast warned.

Motorways leading to the Baltic and North Seas will be especially crowded, warned the auto club, leading to “heavy return traffic,” with Friday afternoon being the absolute worst time to travel. ADAC advises travellers to hit the road Tuesday or Wednesday to avoid the worst traffic jams.

Most of the trans-European north-south routes will have periods of “massive” congestion, the Auto Club Europe reported Monday. Drivers going through the major Alpine passes should plan to be “patient,” the club warned. It may take as much as four hours to transit parts of Austria’s Tauern autobahn, including the 6-kilometre Tauern tunnel.

To ease traffic on German autobahns, authorities are extending the usual Sunday and holiday ban on heavy trucks to Saturdays in August. Vehicles over 7.5 tonnes will have to pull over between 7 am and 8 pm every Saturday.