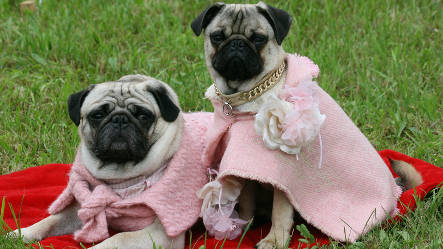 Dog owners are spending serious cash on their five million dogs as the four-legged fluff balls rise to the status of favourite child, the VDH said. Boutiques are popping up in cities across the country along with many websites that let owners buy posh accessories for their pups.

“The trend is going up to the second and third collar – then the dogs have something that goes with every day of the week,” said Monika Knut, the owner of Hundestolz (Dog Pride) boutique in Düsseldorf.

She says owners frequently come in looking for outfits for their pets to match their own.

“For the owner’s pink outfit, the dog needs to have one just like it,” Knut said.

Boutique Every dog is a star! can be found in Kiel, Hamburg, Berlin, Westerland auf Sylt and even in the Spanish city of Marbella. Owner Koko von Knebel said those who frequent her store don’t necessarily fit the stereotype of posh dog owners.

“Our customers are not just the upper 10,000, even Oma Müller comes in with her poodle” she said, adding she also has clientele in Saudi Arabia, Egypt, India and the US.

Her store sells collectable porcelain dog bowls made by Belle Epoque Designs, costing about €100 each. Oma Müller can also spend €13,000 on a Swarovski-studded bed, adding an Obama-themed bed set to go with it. The Kiel native started with just 200 items available, but continued interest has helped her build an empire with more than 10,000 canine accessories in stock, some even under her own Koko von Knebel label.

“Luxury is the theme. When one wants to go shopping in a high-end store, the dog also has to look its best and wear a nice collar,” said VDH spokesman Udo Kopernik, noting that Germany is well ahead of its European counterparts in pet-spending.

The trend mimics what has already been happening across the Atlantic in the US. There, dog owners spend more than €35 billion ($50 billion) on Fido for everything from Swarovski-studded collars to testicular implants.

“Every year in New York there is a massive fashion show just for the latest looks in dog-wear,” noted Knut.

In Japan, cats and small dogs are more popular than children as there are 23 million more pets than children under 15. There, owners spend more than €6.5 billion ($9.5 billion) on their furry friends.

The trend is not without its critics.

“Whether its nail polish, winter coats or fancy collars, these are the cruellest things for an animal,” said Steffen Beuys from the German Humane Society. “Most of these products do more to satisfy the vanities of the two-legged owners and do not consider the needs of the animals.”

But von Knebel says that much of what she sells is in the best interest of the dog, with sunglasses that have UV protection and “protective booties for the hot asphalt in Dubai.”