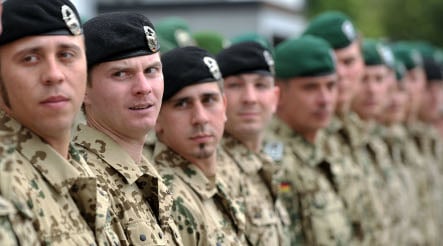 In the course of a misspent youth, Stefan, 19, says things could have very nearly gone “the other way” for him.

“I could be in prison today,” he recently told The Local.

The young man, who lives in a town in the eastern German state of Brandenburg, was coy about details but indicated there was a single moment in his past when he made a choice that put him back on the right path. Had he made the alternative choice, his life might’ve been ruined.

He did admit to dabbling in petty crime and the far-right scene before managing to extricate himself from a gang of what he calls “drunken idiots.”

His own father, a factory worker in communist East Germany, died when he was young – in part from alcohol abuse – and his mother, a cleaner, struggled to keep him on track.

Stefan has, in his own words, “grown up” and has started an apprenticeship. But he finds it boring and is instead looking to what he sees as an obvious choice for a young eastern German like him. He wants to join the army.

If he realises the latter ambition, Stefan will be defying the odds. According to Ministry of Defence figures recently obtained by the Green party, Ossis – or Germans from the formerly communist east – are doing more than their fair share of the grunt work in the armed forces, or Bundeswehr, while enjoying considerably less than their share of promotions.

This has led critics of the government to argue that Ossis have become the military’s “cannon fodder.” Young easterners, they argue, are flooding into the armed forces because, 20 years after the fall of the Berlin Wall, they have few other job prospects.

The figures were made public shortly after three young German soldiers were killed in Afghanistan. The three soldiers came, respectively, from the eastern states of Brandenburg, Saxony-Anhalt and Thuringia.

Rüdiger Göbel, a journalist with the leftist newspaper Junge Welt who recently earned a swift rebuke from the government for describing Ossis in the Bundeswehr as “cannon fodder,” says the overrepresentation of eastern Germans in the military crystallises two pressing political issues in Germany: the unpopularity of Germany’s involvement in the war in Afghanistan and economic stagnation in the east.

“We got a huge response after we wrote about this issue,” he told The Local. “The fact is, the majority of people in Germany are against the war in Afghanistan but the majority in the Bundestag support it.”

He said he fervently hopes the issue will stir up voters ahead of the September parliamentary elections.

It is hardly surprising that people from economically depressed areas will be overrepresented in the armed forces. It’s a phenomenon seen around the world.

Saxon Greens MP Peter Hettlich, who obtained the Bundeswehr figures via parliamentary inquiry, compared the situation with the high proportion of African-Americans and Hispanics in the US military. In the Mitteldeutsche Zeitung, he went so far as to say eastern Germans were being “exploited” because of their economic situation.

But not everyone sees it this way. Gero Neugebauer from the Free University’s Otto Suhr Institute for Political Science, said the issues were more complicated than just poverty.

“I do not know if you can compare the young East Germans with less-educated African Americans in the United States Army,” he said. “One should look at this development in context of the migration of young, well-educated eastern German women who go west for vocational training or jobs.”

And Neugebauer said the pressure to sign up was only likely to increase with the poor economy and more western Germans losing their jobs: “Eastern Germans may see their choice as the better alternative – also because they get well paid, too.”

This is pretty much the way Stefan in Brandenburg sees it. He said if he does end up joining the military, it will be his decision.

“It doesn’t trouble me much,” he said. “Nobody’s forcing me to join the Bundeswehr. I could probably get a job somewhere else. Maybe if I’d been born in the west I’d have a good job already in the auto industry. But they’re not doing too well either, are they?”