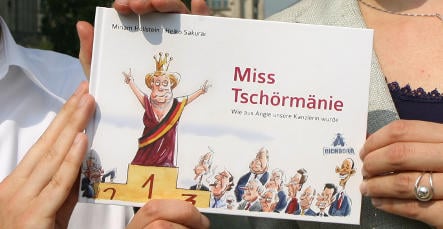 How did Angela Merkel, the quiet-as-a-mouse pastor’s daughter raised in former communist East Germany, become the most powerful female on the planet?

Find out now in … a comic book.

The new, 64-page work reveals all from cradle to chancellery and though the format is unusual – a first for a chancellor in straight-laced Germany – it sold out in four days.

Released three months ahead of the September 27 general elections expected to sweep the country’s first woman chancellor to a second term, the booklet is an offbeat attempt to explain the Merkel phenomenon.

Its title, “Miss Tschörmänie,” mimics a heavy German-accented pronunciation of the English name for Germany. And its message is that Merkel made it through a combination of ruthlessness, hard work and plain luck.

Journalist Miriam Hollstein told AFP she got the idea in France in 2007 when she stumbled across a hit comic book poking fun at the career, and hyperactive right-wing style, of Nicolas Sarkozy as he sought to become French president.

“How come we don’t have this kind of comic book in Germany,” she recalled thinking to herself. “Are we, the Germans, totally humourless?”

So a year ago, Hollstein teamed up with Heiko Sakurai – she did the text, he did the drawings – and the choice of 55-year-old Merkel with her “incredibly captivating personal history” was obvious, Hollstein said.

The result is a world away from France’s beloved “bande dessinee” or “BD” culture that can cut a proud politician down to size with a few strokes of a pen and a strategically placed speech bubble.

Beyond a few jabs – “Don’t cycle, Angela, you can’t tell the difference between right and left!” her parents cry at one point – Merkel gets off fairly lightly in “Miss Tschoermaenie”.

Even after four years in power, “Angie” as she is known – the Rolling Stones ballad of the same name is her campaign song – remains popular.

She is well-regarded internationally thanks to her role during the high-profile German presidency of the European Union and hosting the Group of Eight, both in 2007.

Forbes magazine has named her the world’s most powerful woman for three years in a row.

And at home, where serving chancellors tend to be unpopular, her reputation has not suffered despite Germany’s worst recession in decades and a steady flow of body bags back from Afghanistan.

Merkel watchers say this is due in part to a matriarchal aloofness – her nickname in certain circles is “Mutti” (“Mummy”) – she appears to maintain while her minions do the hard work.

“There is also the fact that she is a woman, that she is conspicuous as one woman among 20 or so men,” Klaus-Peter Schoeppner from polling group Emnid told AFP.

Sketched in black and white by Sakurai, the comic book starts with Merkel’s birth in the West German city of Hamburg on July 17, 1954 to Horst Kasner, a pastor from Berlin, and his wife Herlind.

Only weeks later, the family moved to officially godless, communist East Germany, and the construction in 1961 of the Berlin Wall – dubbed the “anti-fascist barrier” by East German authorities of the time – made any return impossible.

The young Angela is shown studying physics in Leipzig, then refusing to work for the Stasi secret police – “Your offer honours me, comrades, but I can’t keep my mouth shut!”

When the Berlin Wall falls in 1989, she is shown coming out of the sauna – a true story – to discover the event that would change Germany’s destiny, and her own.

Merkel is then seen romping her way through the back-stabbing political world of newly unified Germany, in what doubles as a brief spin through recent German politics.

No shrinking violet, the animated Merkel is seen ruthlessly sidelining people who get in the way of her meteoric career rise, in the end jettisoning her former mentor himself.

Despite occasional hiccups, she out-manoeuvres her many male rivals – often portrayed as fully deserving their fate – to become party leader and, triumphantly, chancellor in 2005.

“I have done it, I have really done it!!!” reads her speech bubble.

The authors have offered the chancellor a copy – but she is yet to respond.