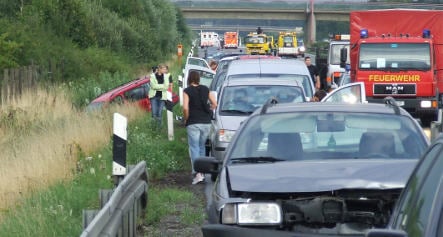 Police from Braunschweig, near where the accidents occurred, said it was the largest series of collisions ever seen in the area. In total, 66 people were injured when several drivers lost control of their vehicles due to heavy rain. The first collision – which began a two-hour-long series of resulting accidents on a 30-kilometre stretch of road – was reported near Hämelerwald towards Hannover.

Many drivers were driving too quickly and closely for the weather conditions, police said. The low-lying sun also hindered vision, a Braunschweig state patrol spokesperson said.

The A2 motorway was closed for clean up at several locations, causing traffic jams several kilometres long as clean up crews worked into the morning. Some 340 rescue workers were involved in the efforts.

“We have to put together all of the data on the injured people and towed cars. This will take until midday at least,” an investigator said.

Authorities estimate the costs of the pile up will be at least €1.5 million