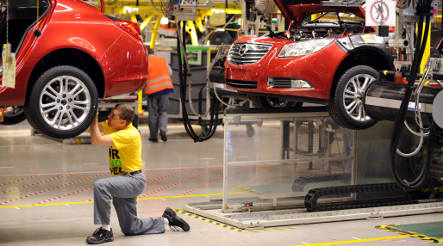 RHJ forsees the elimination of “almost 10,000 posts in Europe” but “we are going to keep the four German factories” which belong to Opel open, Fischer told the popular German daily Bild.

“A detailed contract will be ready by the end of the week,” he added.

The holding group aims to save €800 million ($1.1 billion) per year by cutting staff, Fischer said.

General Motors Europe, of which Opel and its sister brand Vauxhall are a part, employs around 50,000 workers at several European countries.

The business daily Handelsblatt reported that RHJ planned to close an Opel plant in Belgium in early 2010, and would halt production at a plant in Eisenach, eastern Germany, for two years before relaunching operations in 2012. A total of 3,900 jobs were expected to be lost in Germany.

RHJ is aiming to buy 50.1 percent of Opel and is ready to put €275 million on the table, the newspaper said.

Governments in Belgium and Britain have expressed concern that Germany, which is involved in talks because it is set to provide state aid for a deal, would seek the best deal for domestic Opel plants at the expense of others.

Fischer meanwhile rejected allegations he was working for the US parent group General Motors, which some say wants to sell Opel for restructuring before buying it back again when GM’s own troubled accounts have improved.

“That is nonsense,” Fischer said. RHJ could not sell Opel until it had paid back any eventual public aid, he added.

RHJ’s leading shareholder, with a 15-percent stake, is Timothy Collin, head of the US investement fund Ripplewood.

In late May, General Motors and the Canadian auto parts group Magna signed a non binding letter of intent backed by German officials, and was to see Magna buy 55 percent of Opel with help from the Russian bank Sberbank.

Subsequent talks have become bogged down, however, and GM has tried to improve its bargaining position by holding talks with other bidders, including RHJ and the Chinese automaker BAIC.

Magna is also expected to present a new detailed offer, Handelsblatt said. On Thursday, Chancellor Angela Merkel voiced support for the Canadian firm, saying: “Magna offers Opel a chance,” even though there were still “many things to clear up.”