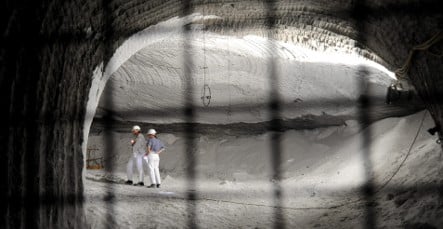 A routine check turned up the contaminated liquid at depths of 950 and 925-metres deep, the BfS said, adding that the level of contamination remains below levels allowed by the Radiation Protection Ordinance.

Danger to Asse employees has been ruled out, but the BfS has instituted protective measures to prevent the spread of the radioactive material, spokesperson Werner Nording said. But he also said the agency would now carry out daily checks on the condition of the facility instead of every fortnight.

But German Environment Minister Sigmar Gabriel in Berlin on Wednesday called Asse “one of the worst examples of irresponsibly handling the issue of permanent storage of nuclear waste.”

The brine likely came from the deep exploration areas of the mine, where allegedly careless former proprietor Helmholtz Zentrum dumped radioactive brine between 2005 and 2008. Instabilities in the underground facility may have pushed the liquid to higher levels, the BfS said.

The Helmholtz Zentrum came under fire last autumn following revelations that they had failed to alert the government to serious safety violations and worrying conditions at the site. BfS has been running the site since January 2009.

Gabriel responded then saying that the facility has “as many holes as Swiss cheese,” adding that it remained unclear who was ultimately to blame for the serious safety violations at the site.

BfS also announced in January that an Asse storage chamber is damaged and could pose the risk of radioactive leaks.

Since then a broad monitoring programme has been checking radiation levels and monitoring rates of cancer and leukaemia in current and former workers there.

In June the BfS confirmed that the site contained unknown quantities of explosives stored near radioactive waste.

It was also recently revealed that toxic chemicals including arsenic, lead and powerful pesticides are also among the 126,000 barrels of untouchable waste which has been stored at the site since 1978.