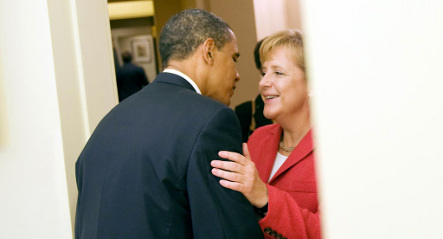 Does he know something we do not? Photo: DPA

He reportedly made the casual remark during Merkel’s visit to the White House late last month.

While on the way to their joint press conference, Merkel said she and her party were preparing their election campaign, to which Obama replied, “Ah, you have already won, I don’t know what you are worrying about.”

The exchange was caught on camera by a team from German station ZDF, but has not yet fully been broadcast, according to Der Spiegel.

Whether designed simply as a piece of flattery or not, the comment has irritated Germany’s Social Democratic Party (SPD).

A colleague of the SPD chancellor candidate and Foreign Minister Frank-Walter Steinmeier said Steinmeier, “likes Obama very much, but even an American president is no prophet,” the magazine wrote.

A proposed visit by Steinmeier to Washington for this week was cancelled after the White House failed to find room in Obama’s schedule.

Steinmeier’s spokesman said that having spent four years as Foreign Minister he had no need to prove his foreign policy credentials with a visit to the White House.