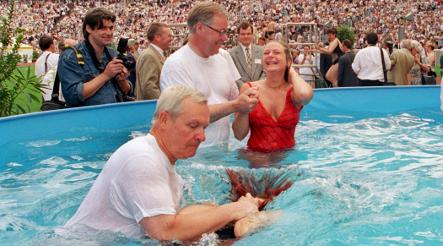 A file photo of a Jehovah's Witnesses meet in Berlin in 1998. Photo: DPA

The Christian evangelical movement, which was born in the United States in the 19th century, drew 50,000 in the German capital, up to 45,000 to a stadium in the western city of Dortmund and similar crowds in Munich, Hamburg and Frankfurt, organisers said.

Some 30,000 people have arrived from abroad, with services to be held in German, English, Polish and Russian.

“Jesus Christ prophesied a ‘sign’ comprised of several components which we can observe today and in which it can be seen that the end of the current global system is nigh,” the movement said in a statement.

Berlin police put the attendance at the Olympic Stadium at “tens of thousands” but declined to provide a more precise estimate because the event was private. The gathering will feature a collective baptism for hundreds of people Saturday before wrapping up Sunday.

Jehovah’s Witnesses were persecuted under Nazi German rule for their refusal to take up military arms but now have a thriving congregation of about 220,000 in the country.

From June until September, the movement traditionally organises mass gatherings, this year in 16 countries.