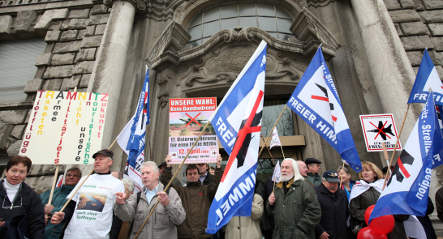 Jung’s decision followed extensive scrutiny of a recent decision by the Berlin-Brandenburg administrative appeals court (OVG) on the project. The Defence Ministry will not seek to appeal the judge’s ruling, thereby acknowledging that “realizing Wittstock for the Bundeswehr is not longer feasible.”

Action groups have been protesting the “Bombodrom” project on the state border between Brandenburg and Mecklenburg-Vorpommern for 17 years, opposing its use as a training ground for some 1,700 missions involving low-flying military aircraft each year, which would also involve bombing runs. Opponents claim the training activities on the former Soviet training grounds would create noise pollution and drive away tourists.

The defence minister warned against viewing the decision as a political defeat for the Defence Ministry or a victory for “Bombodrom” opponents, adding that the decision was tied to a reduction in millions of euros in investment planned for the region. The Bundeswehr plans to explore other options abroad.

Most recently, demonstrators in Fretzdorf, some 100 kilometres (62 miles) northwest of Berlin, called for scrapping plans for the site. Organisers of the protest estimated their numbers at nearly 10,000.

Numerous court rulings have supported protesters’ claims. In March, the OVG in Berlin-Brandenburg ruled in three appeal hearings that the military could not use the area, citing serious errors in how the project was evaluated. The Defence Ministry would have had until Monday to file an appeal.