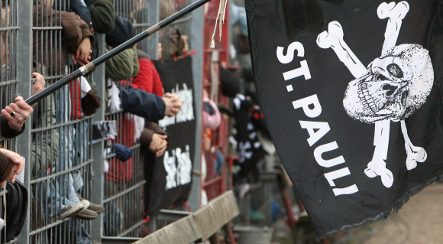 A police unit stormed the Jolly Roger, a St. Pauli fan pub, on Saturday night, where some 100 people were celebrating a birthday party.

“FC St. Pauli took note of reports of the police operation in the fan pub Jolly Roger with horror and great regret,” the team’s official statement issued on Tuesday afternoon read. The football club’s president Corny Littmann sent a letter to the Hamburg police department asking them to clarify the incident.

Tay Eich, a member of the FC St. Pauli board of directors, said the police operation was “totally unacceptable,” calling for it to be “clarified completely.”

Jolly Roger manager Stephan Delius watched the police operation from behind the counter. Within minutes, the bar was full of riot control gas. “The patrons fled in panic toward the bathrooms and the beverage storage area in the basement, with masked policemen carrying batons right behind them,” he said.

As one of 30 patrons in the basement, Ulrike Swadzba said she was “unable to get out.” We couldn’t get any air up there at the bar,” she added. At the end of the night, Ballkult e.V. reported “four knocked-out teeth, bad bruises, mass panic, as well as dozens of guests who threw up from the irritant gas.”

He denied that the police operation was a revenge action by a Eutin police unit. “That is complete nonsense, particularly as many of the police officers involved in the operation were from Hamburg,” he said.

In March, a member of a Eutin BFE police unit sustained serious cuts in a street fight in front of the Jolly Roger between rioters and police following a second division derby against Rostock.

On Monday evening, 100 people involved in the incident, as well as witnesses and lawyers, met at the Jolly Roger to discuss how to proceed. In addition to establishing a fund to provide victims with medical and legal support, fans had planned a Friday demonstration to follow an FC exhibition game with first division Scotland team Hearts of Midlothian.