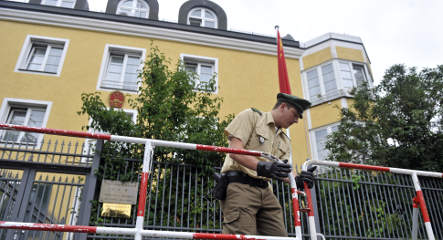 Several Molotov cocktails were thrown at the consulate by unknown perpetrators, police said.

The building’s exterior sustained minimal damage, and a Chinese flag on a flagpole was burned. The city’s criminal investigation department is currently searching for two unidentified men seen around 1 am near the consulate building. Local residents described hearing a car with squealing tires speed off.

The incident follows violent demonstrations outside the Chinese embassy at the Hague in the Netherlands. Police there arrested 142 people for throwing stones at the building on Monday.

Munich authorities are not sure whether there is a link between the consulate attack and ethnic violence involving Uighur Muslims in China. Erkin Zunun, a spokesman for the World Uighur Congress, said he believes the two incidents are linked.

“We don’t know who threw the petrol bombs, but we do know that our people hate the Chinese authorities,” he said. Zunun said he was angered by the conduct of Chinese police. According to official figures, more than 150 people have died so far in the riots in the northeast region of China where many Uighurs live.

Munich is home to a large Uighur community. A Uighur demonstration on Tuesday in the centre of the city led to conflict with a Chinese tourist group hoping to view the famous Marienplatz, according to police. Uighur protesters chanted “Chinese out” as police worked to separate the groups.