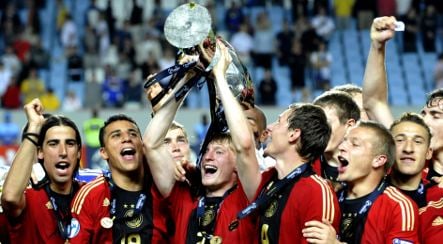 The Germans – who added this title to the ones presently in the hands of their Under-17 and Under-19 compatriots – scored through Gonzalo Castro and the impressive Mesut Özil.

It was England’s first appearance in the final since 1984 and gave German coach Horst Hrubesch echoes of his major success as a player with the then West Germany in the senior 1980 European final over Belgium.

England Under-21 coach Stuart Pearce revealed he would stay on for the next campaign for the 2011 finals and try and improve on the team’s performance.

“Just before the semi-final I signed a two year deal,” said Pearce, who was suffering another disappointment against Germany after losing to them as a player in the 1990 World Cup semi-final. In that game he missed one of the penalties in the shootout – and then lost again in the Euro ’96 semi-finals.

“I enjoy where I work, my employers and the players I work with. Why would you walk away from that,” added Pearce, who will also continue to work with England senior coach Fabio Capello, who was unable to attend the final having been at the Confederations Cup in South Africa.

England started brightly with Adam Johnson whipping in a couple of dangerous crosses while James Milner – who was playing his 46th and final Under-21 international – delivered a solid freekick from the left only for Martin Cranie to head over under pressure.

Lone England forward Theo Walcott – all the other specialist strikers were suspended – then broke free seizing on Aston Villa midfielder James Milner in the third minute but shot wide.

Germany got in their first effective attack just after the quarter hour mark when the impresssive German captain Sami Khedira linked up well with Özil but Micah Richards was on hand to deflect the shot away for a corner.

Özil arranged for Castro’s goal with a beautifully weighted pass which evaded Cranie and the German slotted it past Scott Loach, who had come in for the suspended first choice ‘keeper Joe Hart.

The Germans looked to be in control of the match and deservedly doubled their lead in the just after half-time as he misjudged Özil’s long range freekick and he managed only a breif touch before it spun into the net.

England midfielder Lee Cattermole came closest to reducing the deficit just before the hour with a shot which clipped the crossbar.

England kept the pressure up and in the 62nd minute Milner turned leftback Sebastian Boenisch inside out and passed the ball to Johnson who failed to take advantage from three metres out.

Özil set up Germany’s third goal as he broke down the middle – right back Cranie was being treated for an injury – and a delightful pass outside to Wagner saw him shoot the ball between Loach’s legs.

Wagner’s shot made amends for a dreadful howler only minutes before when he failed to net from a metre out following another stellar pass from Özil – a beautifully curled effort which gave Loach no chance and rounded off a humiliating night for England.